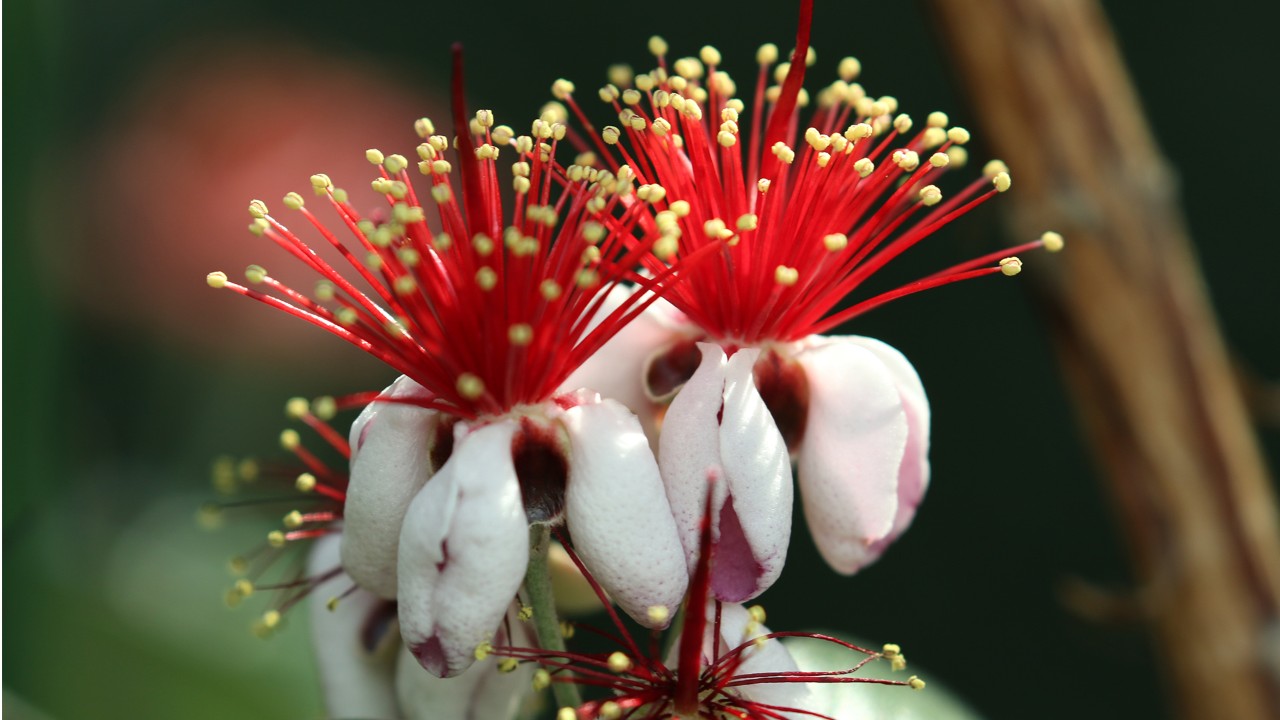 A close-up of the flowers of Feijoa sellowiana.

The genus Feijoa consists of only a single species, Feijoa sellowiana, and is named after Don da Silva Feijoa, a Spanish botanist. The native range of Feijoa sellowiana is from Brazil to Argentina, and it is commonly known as feijoa, pineapple guava, Brazilian guava and guavasteen (in Hawai'i). Although it is not a true guava (genus Psidium), both Feijoa and Psidium are in the Myrtaceae family and the common names allude to the guava-like fruit of F. sellowiana. 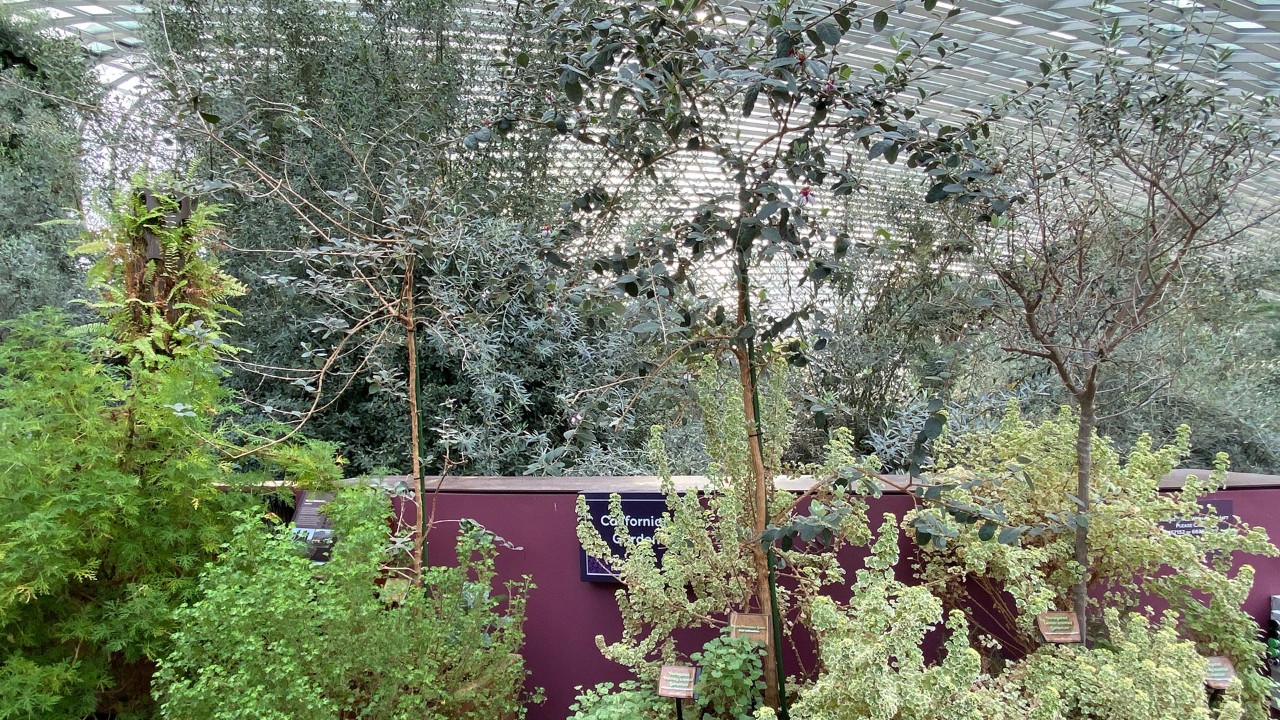 A shrub or small tree of Feijoa sellowiana (center, staked) in the Flower Dome’s California Garden.

A spectacular shrub with silver-green foliage, the pineapple guava blooms frequently along its branches. The flowers have thick whitish petals with carmine coloured stamens and carpels and yellow anthers. The edible flowers have a taste akin to marshmallows and can be eaten like candy, tossed into salads or used as cake decoration. Their pulpy, juicy fruits taste similar to pineapple but with spearmint overtones, and are best eaten raw but can also be cooked into pies, jams and cakes. 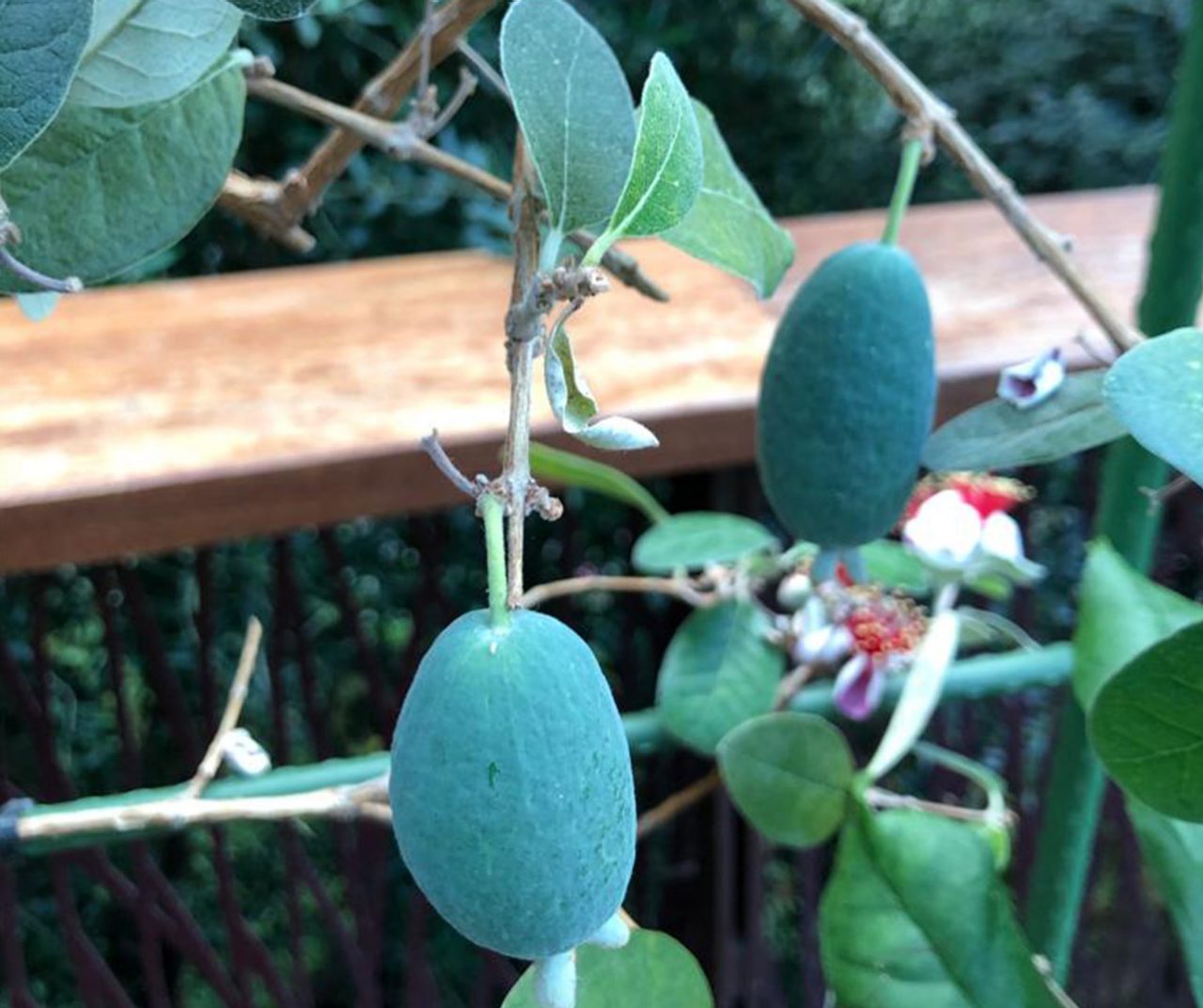 Birds attracted to feed on the fleshy, sweet flower petals, carry pollen grains between flowers, assisting in pollination. As Feijoa flowers only produce pollen and no nectar, they are less frequently visited by bees. Cross-pollination between flowers of different trees is required for most commercial cultivars of Feijoa sellowiana but some self-pollinating cultivars have been described. The feijoa fruits develop better in the highland as opposed to lowland tropics but the plant can be grown in a wide range of habitats from warm temperate, subtropical and cool, highland tropical climates.

Therefore, deemed as one of the underrated edible fruit-bearing plants from the Myrtle family (Myrtaceae), Feijoa sellowiana is frequently overlooked due to unresolved issues in commercial pollination and limited genetic improvement. Unfortunately, this restricts its value as a potentially heavy producer of flavourful fruits and flowers.

Besides being an attractive fruit crop, small-holder planting of feijoa in its native range  provides a chance for a non-timber forest product to contribute to forest conservation. Promoting in situ conservation of native crops like feijoa is an important strategy to conserve genetic resources of Feijoa sellowiana while continuing to provide a range of ecological services and economic benefits. For instance, feijoa fruit and flowers are a food source for many animal species, supporting the community structuring of mammals and birds. There has been participatory research conducted in Brazil which involves farmers in the research process, allowing them to contribute in the development of local programs that maintain genetic diversity and traditional knowledge associated with Feijoa sellowiana.

Have a look at these delicate flowers up-close at the Californian Gardens in Flower Dome! 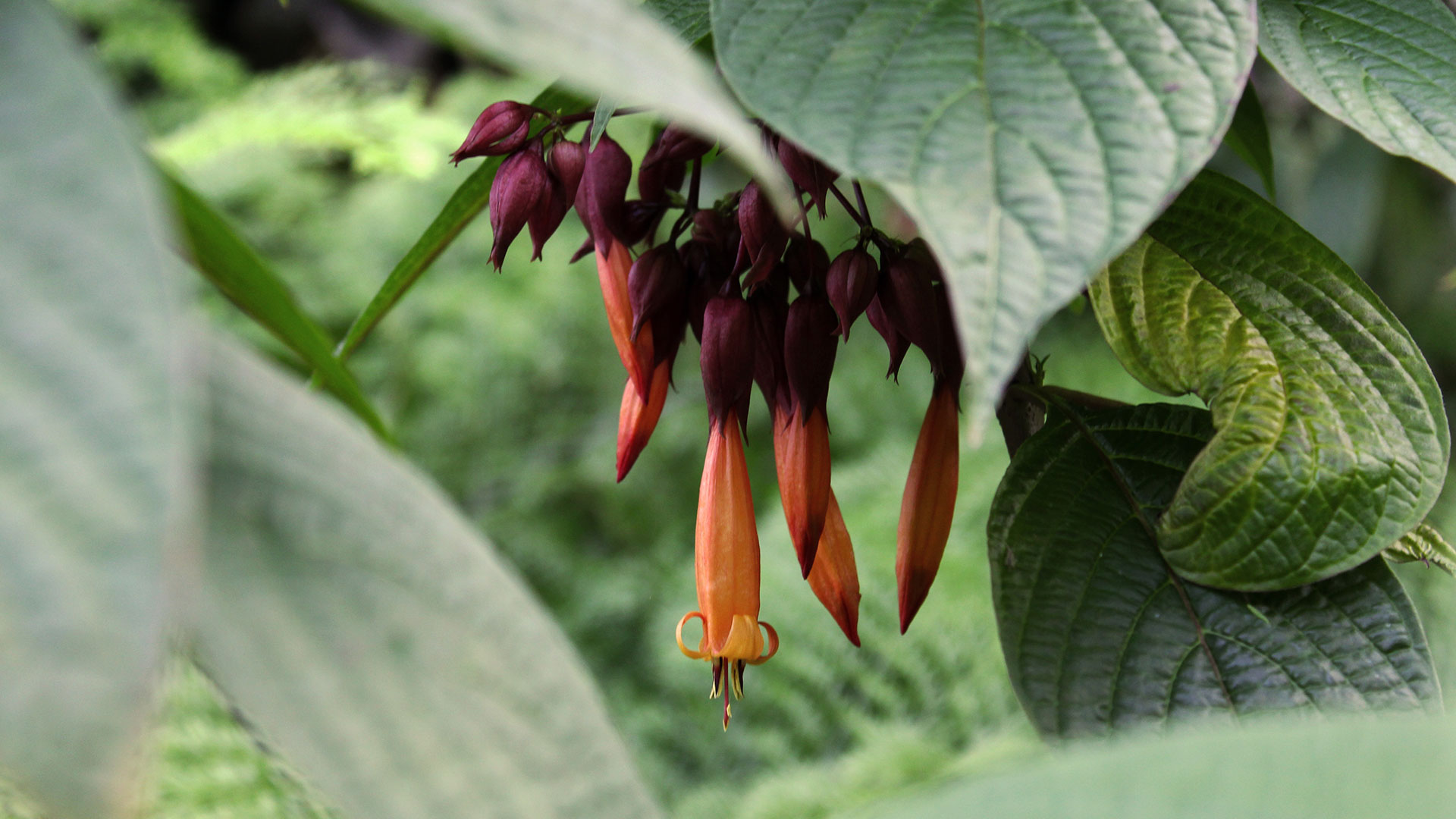 Our golden fuchsia is flowering for the first time and the Cloud Forest might be one of the only places in Singapore to see this plant in bloom! 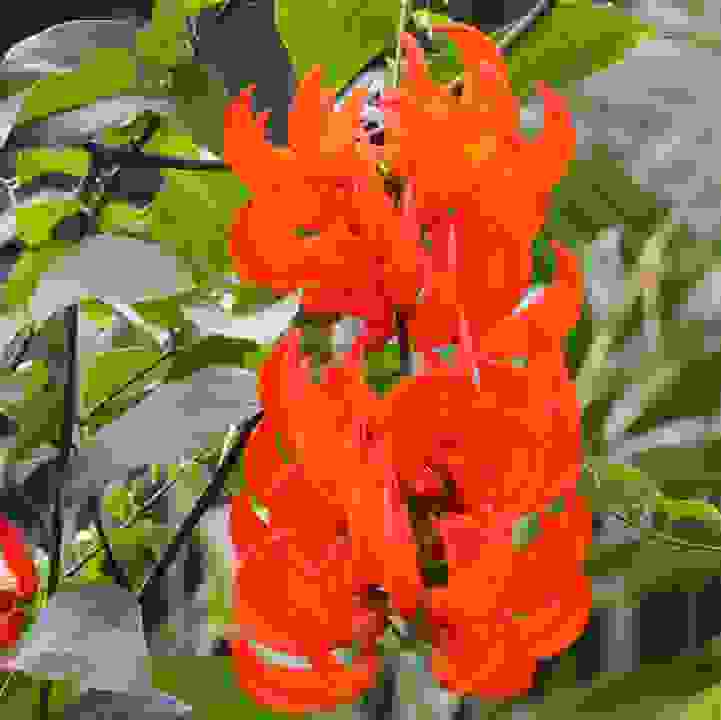 It’s not the first time our scarlet jade vines are blooming but they have never failed to amaze us with their red, firecracker-like inflorescences! 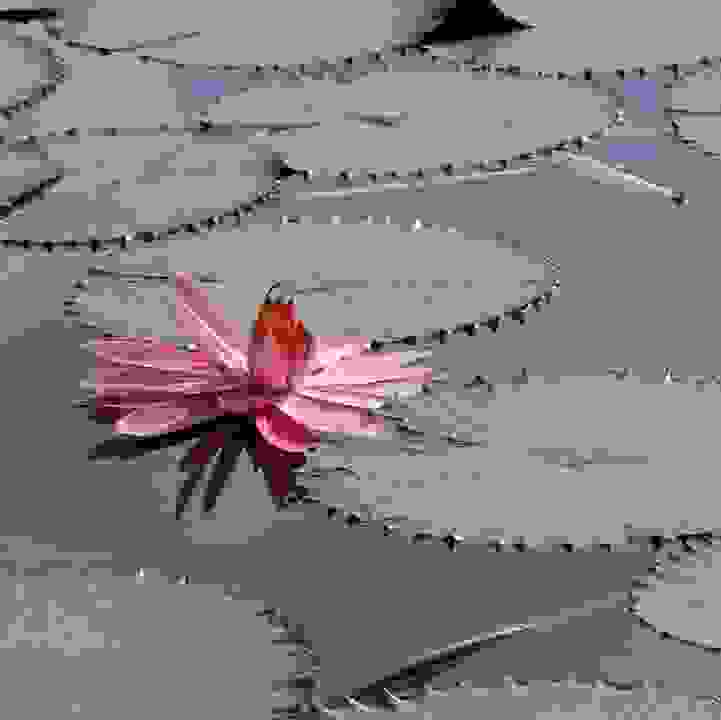 Flower Dome isn’t the only place in the Gardens adorned in pink this season! Standing out above the water, our pink water lilies (Nymphaea cultivars) are currently blooming in one of our outdoor ponds by the bridge to Satay by the Bay.

Outdoor Pond, near Satay by the Bay 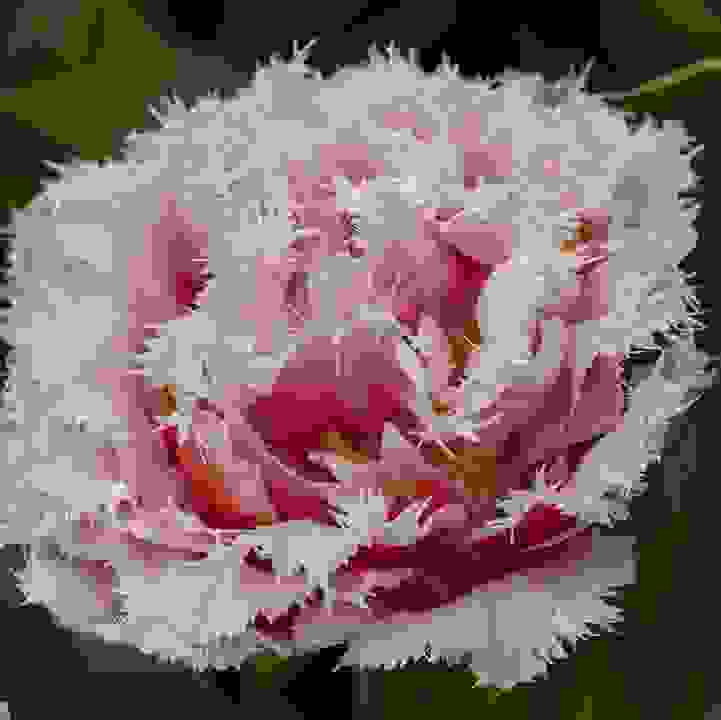